Atyfc u9 blue champions at Oakley 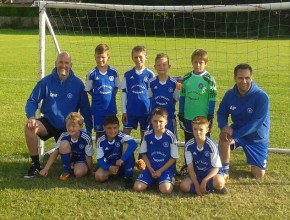 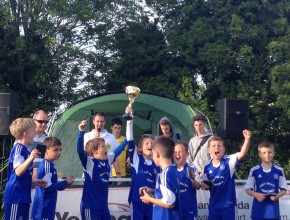 Atyfc u9 blue were victorious in the Oakley FC tournament on Sunday. With a strong team available they played their first 2 group games with style winning all against berg FC and Oakley FC 2-1 and 2-0 respectively. Goals coming from Noah may, maxwell Andrews, Liam crabb and Harry perry. Their third and fourth games was tough against winklebury and down grange. They lost against winklebury 2-1 but put in another tremendous performance to beat down grange 1-0 with perry getting the goal. They needed to win their final game against Basingstoke colts and won in style with goals from may x2 and Henry Youd.Louis Williams putting in a great performance In goal for the group games and Findlay Stewart solid at the heart of the defence.

Their quarter final they were drawn against Sherbourne st john and Andover finally got the breakthrough with a minute left with may scoring the winner.
The semi final was against hosts Oakley and after going a goal down they dug deep and won the game comfortably with goals from May, Andrews and youd.
The final awaited against winklebury wizards and with instructions to enjoy the moment and play with passion they did just that. A close first half saw a 0-0 but the second half saw Andover start quickly with may scoring and Andrews adding a quick second. Youd then hit the post before Winklebury pulled one back with 2 minutes to go. Andover defended with pride and won the cup. The boys were over the moon but credit to winklebury who played a good game and made it tough for Andover. Thanks to both sets of parents for supporting both teams in a sporting way.
Andover Liam crab, Louis Williams, Findlay Stewart, Noah may, Henry youd, Maxwell Andrews, Charlie Wallis and Harry perry.
Well done boys. This is what you deserved after all the hard work you have put in all season. Dave and I are so proud of each and every one of you.