Comments: No comments /
Categories: Under 12s, Under 12s Match Reports 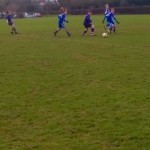 Town hosted Woolton Hill at the Walworth, which was a cold and windy affair and with the pitch heavy under foot in places. The reverse fixture, saw Woolton Hill claim there only win of the season so far. The Town were keen to have a different outcome this time around, to continue the great run of results which has propelled them to second in the league with a game in hand. Pre match consisted of re enforcing the mistakes of the last encounter wouldn’t be repeated.

The game started with only one sub available for Town and none for Argyle, the blues started slowly and conceded procession on a number of occasions. The Blues quickly began to be dragged into a scrap and ignoring their football, the play was contained around the centre circle and the tackles flowed. As the half progressed, The Blues started to impose their football into the contest. With the reshuffled defence pushing high and pressing Woolton Hill into mistakes, the slick passing of previous games returned and started to fashion chances. The inter play through midfield to the forward line, at times bemused the Argyle team, without any output to show for the effort applied to the task.

The play continued and Town grabbed the first goal with great pressing and movement from Jack Herdman and Brandyn Reeves, with Cayden Brooker pulling defenders all over the pitch, this allowed Leo Ferro to arrive in the box and power a shot low and to the corner. Due to the lack of players for this match, the management team decided to rotate the sub every 10 minutes, this allowed the front line to remain fresh on the energy zapping pitch. The second goal arrived with great play from Leo Ferro and Cayden Brooker linking up well to supply Callum Lowe with a through ball, which he duly dispatched with a classy finish. Jack Herdman showed again why he defies logic as the most combative player within our ranks, but also the smallest, what he lacks in height he makes up for in heart and desire. The captain for the day continued to win challenge after challenge and kept the forwards supplied and connected the defence and the attack seamlessly.

Half time arrived and the Blues looked good value for the two goals, to be honest if it wasn’t for the Woolton Hill keeper, it would have been more and Cayden Brooker saw at least two good efforts smartly saved by the stopper. All the talk at the break was about not getting complacent and push on and complete the days work. Town started playing the ball along the back line with Ollie Pitts, Aiden Lowe and James Sygrove, looking comfortable in procession. Cai Jones, showed again his new found physical attributes and used this to add to his skill to start the attack again and again. The forwards were unable to break down the Argyle defence, it took a special shot from distance from the make shift defender James Sygrove. James, using his natural instinct to push forward he found himself 25 yards out on the left and struck a wicked shot which dipped just under the cross bar and in.

Town seemed to think that the game was won, but Arglye to their credit, fought on and to their credit started to fashion some good opportunity’s. The Blues who were guilty of complacency in the last meeting, again started to show signs of this again. Trying flicks and tricks and the forwards looking to beat the whole defence and ignoring the football which has served them so well. On a counter attack, Woolton Hill ran at the Blues defence and as the challenges went in, the penalty was awarded. In truth, it was no more than they deserved, Daniel Butt in the Town goal, was having a fairly routine day. He was now called upon to conserve the clean sheet, it wasn’t to be and a smart pen was slotted into the right hand corner living him no chance. As the half moved on, Town looked uneasy and although showed signs of the cutting edge of earlier, never regained the control from the first half. The half ended with the Blues, strapping again, as with the first moments of the first half. The result was 3:1 and brings the boys closer to their ambition of back to back promotions and league wins.

For the Blues to win this league, they will have to win games like this and games such as last week to be crowned champions. Although, in the end the result wasn’t as convincing as the first half or the score suggested, the mark of a winning team is the ability to win ugly and this to some extents happened today. The man of the match was Captain Jack Herdman and Sportsman was James Sygrove, both had great moments and helped to drag the team over the line today. The boys need to realise that they have no divine right to win games and they need to apply full effort until the final whistle. If this match helps to add this understanding, then the league is possible, if not the blues will not achieve this goal. all in all a good result and some great play at times, they have given us high expectations and they have to live upto this every match. They can do this, with the right attitude. JP