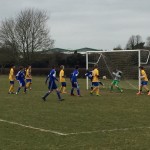 The run-in begins with this match taken place at a cloudy Walworth, Town host West Berks Warriors and were keen to put clear air between themselves and Tadley, who weren’t in action this weekend. This weeks training had focused on wing play and set pieces. The boys have shown a marked improvement with their training commitment and this is being translated into the match play and decision making skills.

With a few absentees for this fixture, the management team looked to mix the personnel up today, two of the three regular defensive players missing and two players filling in that position for the first time. Callum Lowe at centre back and Cai Jones at left back, with Ollie Pitts occupying his usual right back slot, this is another example of the strength and depth of the squad and the team first attitude. Both players, happy to help the team and give their all, the midfield consisted of James Sygrove, Jack Herdman and Callum Woods, forwards of Cayden Brooker and Brandyn Reeves, Brandyn playing the advanced role this time, having previously more often unselfishly played the deeper role this season and supplied the in form Cayden Brooker with many chances. 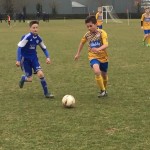 The game kicked off with both teams starting slowly, both with early opportunities to break free and create chances. The reshuffled back line took a little time to adjust to the changes and gain an understanding, Town were defending from the front and pressurising the Warriors high up the pitch. Jack Herdman leading by example, every player was winning their individual battles and the pressure soon told. Brandyn Reeves scored with a sublime shot on the left, he showed a level of control and skill that has seen him often perform a play maker role for the team this season. He reminded everyone, that he is also a goal scorer when required, another example of playing for the team first and foremost.

The midfield of the Blues started to dominate the play, with Callum Woods using the creative skills he processes, with great movement from every player and all wanting to be involved. The defence had started to gel and Callum Lowe and Cai Jones were growing into the new positions with confidence and covering well with Ollie Pitts, the only real threat was the ball over the top, which the boys adapted to as play continued. CaLlum Woods then got the second goal, arriving at the far post from a fantastic delivered corner from the teams set piece specialist James Sygrove and stabbing the ball home, no more than he and the team deserved and that concluded the first half.

During the interval, the discussions were about passing and movement and for the defence to allow space for the long ball. As always, the strength of the squad paid dividends, with Leo Ferro coming on up front and Matt Smith slotting into midfield. Cayden Brooker was creating movement and dragging players all over the pitch, unselfish play and providing room for other players to expose. Cai Jones continued to provide pace and precision and a cutting edge at every opportunity, The third goal didn’t take long to arrive, with Callum Woods again supplying the clinical finish.

Daniel Butt Towns sweeper keeper, had to stay alert with the uneven surface occupying his concentration and making him apply his skills when required. Dan’s kicking today was superb and frequently turned defence into attack. Leo Ferro started to stretch his legs and take on the Warriors defence, being supported by the midfield and the rest of the team. Callum Woods completed his Hat Trick, with another great strike, he proves week in week out, effort + skill + desire = goals. Another fantastic performance today and his partnership with Jack Herdman is the engine room of the team.

The Warriors were then awarded a penalty, which they dispatched to make it 4:1 to the Blues. Another switch in positions, with Cai Jones and Matt Smith up front with ten mins to play, Cai was straight out of the traps with pace and new for this season body strength allowing him to impose himself and show his skills. Matt Smith also got stuck straight in, with great movement and reading of the game, which often see’s him in the right place at the right time. As the game ran on, the ball was played over the top for Cai Jones to run onto, with two defenders closing in, Cai out paced them and slotted the ball home, capping a great performance and sealing the win for the Blues.

To conclude, today Town showed that they have the determination to win this league and that they play as a team and can deal with different situation when challenged. You know that the team is progressing when other Andover Town managers praise and wants to watch the boys. The most pleasing aspect is that the hard work from training, can been seen translated during the match, very satisfying to see the boys understood and believe in what we are doing. Every player played their part again today, the parents could have awarded anyone of them today. They decided on Sportsman went jointly too Cai Jones and Jack Herdman, today’s win owed a lot to these two performances. Man of the match went to Hat Trick hero Callum Woods, a complete performance today. A big thanks to Eric Smith for Lino duty and Julie Butt for the great photos. The dream is alive and kicking, four games to go, win them and it’s back to back championship wins for a group of players that have grown into a major force collectively. JP