The cancellation of the match last weekend, lined up a back to back fixture schedule with both title competitors within a day. The first a trip to Tadley Calleva and then at home game to Basingstoke Colts on Sunday. All three teams have headed the league throughout the season, so it was a some what fitting way to help decide the order of the top three. 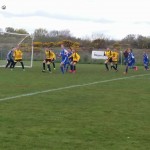 Town arrived at Tadley for an 11:00 am kick off on Saturday, they could be considered our boggie team. The Blues have been beaten by them without even registering a goal on two occasions this term. The team had worked in training on defending the long ball and countering with fast flowing wide play. The boys played this to perfection, going into half time were dominating precedings. Within two minutes of the second half, town conceded, this just intensified the boys.

They created chance after chance, Tadley barely leaving their half for long periods. But, were unable to score, time and time again the ball was cleared from the line. The final score was 1:0 to the hosts, it was clear they were all relieved at the end. I don’t think I have seen a better collective display of pure team play ever from this group.

This result effectively ended the chance of winning the league, but after that display it was secondary to what we had witnessed. The team has now raised the bar on what they are capable of, the link up play, the passing and movement and the closing down as a unit shows that not only have they got individual skill, but a passing game not seen in this league. 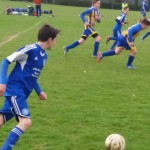 The second game, Basingstoke arrived as top of the league. The Blues were going in to enjoy the game and reproduce the performance of the previous day. If this was possible, this would re enforce the belief that this team has grown again to a higher level. As before The Blues grabbed the game by the scruff of its neck, again chance after chance were created. Some great keeping from the Basingstoke stopper held it at 0:0.

Just as the half was drawing to a close, again Town were punished despite their dominance. The second half started and again the boys continued to push forward. They also do not give up, ever! The ball was constantly within the Basingstoke half, at last Town produced the finish. Callum Woods smashed home the equaliser, no more than he deserved for coming on at half time and raising the energy levels as he does.

Within 10 mins, Brandyn Reeves put Town in front, a pin point shot arrowed into the net. He also coming on and instantly having an impact. Basingstoke, to their credit battled on and fashioned a few chances, Aidan Lowe in goal, made great decisions for both games, kept the lead in tact. Then a cross from the left and a deflection sent the ball into the Blues net.

This was a setback, this team didn’t drop their heads or performance, after a sustained piece of pressure the lead was regained by Town. Leo Ferro, showed why he now commands the centre of midfield, a powerful driving run through the heart of the Basingstoke defence, placing the ball calmly into the corner of the net. The game ended at 3:2 to Town, this guaranteed second in the league.

The man of the match award for both games went to Josh Williams, for a commanding display and great skill throughout. Sportsman for Saturday went to Leo Ferro, showed every skill needed to dominate the centre of the park, great performance. Brandyn Reeves was awarded Sunday’s Sportsman, he Showed another level of vision and passing, then scored a cracking goal, great showing and reminding everyone of his ability.

A special mention to Laud for stepping in and Reffing the game, this is why we love this club. Thanks Laud, you did a great job, even when it got a bit heated! One game to go and unless Tadley lose or draw one and lose the other, we will be second.

For a team that at the beginning of last season had at least Four players that had never played a competitive game before, to today when they have learned and worked hard to first compete and then win. This commitment and skill moved them to champions and then to come within one game of that championship again at a higher level is quite amazing. The style of play is what pleases the most, this team can literally go as far as it wishes, the whole 12s Blue Family are totally proud of each and everyone of this team. JP