It doesn’t seem possible that the season finished just over three weeks ago as the tournament season is now in full swing. However, as the 8th May was a landmark day for the Club it would be remiss of us not to bring the events of that day to your attention.

Congratulations to Andy King, Paul Eyles and their U13 Blue squad who finished champions of U13 Division One following a final day 7-0 victory over Oakley Tigers. Thanks to the generous support of our parent Club Andover Town, the boys were able to play this fixture at the Portway Stadium and never looked like they wouldn’t get the one point they needed to take the title. 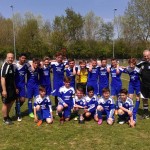 Laud Brown’s U9 White squad reached their second Trophy Final of the season, a remarkable achievement. This time they were able to put the disappointment of a penalty shoot out defeat in the first final behind them and won the Spring Trophy with a 3-2 triumph over Winklebury Wizards Red U9. 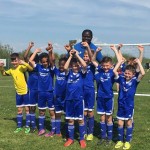 Darren Reeves and Jody Pitts U12 Blue side beat West Berkshire Warriors 3-2 to gain the point they needed to confirm back to back promotions. His team have exceeded all expectations and should be very proud of themselves. 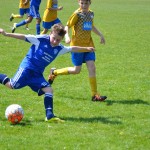