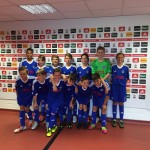 This new team made from long standing known quality quantities and new and exciting prospects, the blues arrived at their new home at Augusta park. As with so many aspects this season, a new experience beckoned and the boys didn’t disappoint. This new team has shown signs recently that they are starting to gain an understanding and a new level of togetherness, this was apparent from the first whistle as Town flew out of the blocks and dominated the play. It’s worth remembering that Chineham Tigers are a well established Premiere league side, the lads dominated this contest from start to finish. It was clear that the Blues had to start taking the chances they were creating, it was Callum Woods (Little Cal) opened up the Chineham defence and powered a shot high into the roof of the net. It was no more than the boys deserved for some cultured play.

Chineham did rally in the second half, it is testament to the strength of this league that no game is a walk over, Chineham equalised and held on for a point. Town should of won this game with the amount of chances fashioned, but their free flowing play and work rate was so satisfying to watch. This was the first point within the Premiere league and with this level of a starting point for this team, anything is possible.

It was back to the League Cup today, the Blues were on the road to fellow Premiere League opponents Oakley. Having the pleasure of playing these for our first ever game in this league and receiving a lesson on what level is required. The management team were keen to see if the boys had grown and learnt from the first encounter, we got our answer within the first minute, Town tore into their opposition and not giving an inch all across the pitch and pressing high and winning possession quickly. Every player contributed to what i would call a free flowing passing game, making great decisions and playing for each other. The energy was coursing through every play and the team were carrying huge momentum, Oakley were clearly shell shocked.

The first goal came from Neo Black, positioned on the edge of the box from a corner, calmly placing the ball home. A just reward from one of the new lads that has slotted straight into the squad. The next came shortly after, Cayden Brooker started what would end in a quality hat trick today, playing just behind Leo Ferro up top today the two complimented each other brilliantly today. Cayden’s hat trick was fashioned by effortless skill and precision and reminding everyone again his passion for goals. Leo Ferro was next with a classic driving run through the Oakley defence and placed the ball clinically into the bottom corner, Leo is showing this season a power and presence to go with his natural skill and this is paying dividends higher up the pitch.

The second half showed that the boys fitness still needs some work and the immense effort expelled during the first period allowed Oakley some possession. To their credit, they did play some good football in the second half and brought the score back to 5:4 with about 15 minutes to go. The boys battled hard to retain their lead and with less than a minute to go, Oakley equalised. As the final whistle blew, the boys could have disintegrated, but to our over whelming satisfaction they picked themselves up and fought to the end, losing in extra time.

When we got beaten in the league 8:1 by this tea, at home, you would naturally feel a little worried for the season, roll on only two games and we end full time in a draw and a minute from a win away from home. This shows just how much this group of young men have focused on training and how they have bonded into a team that fights for each other and also shows that each and everyone have a bright future in football and their lives in general. I have to mention the other members that played their part today:

Daniel Butt: Outstanding today, mentally as well as physically. Well deserved his man of the match award.
Max Bissett: moved to central defence and didn’t disappoint at all, great at making hard skills look easy.
Scott Walker: Scott is an all action player and also plays in midfield, solid as a rock.
Ollie Pitts: had a great first half and won his personal battle with his counterpart.
Cai Jones: Fantastic skill and pace, played everywhere today and was awesome at times.
Neo Black: Does the simple things really well and marshalls the back line like a boss, took his goal brilliantly.
Matt Smith: linked up with the play and put some good through balls into the front two, progress is constant and pleasing.
Jack Herdman: The most combative player I’ve ever seen, showed today he has skill and intelligence to go with it.
Max Lunn (Steve): Max is a clever footballer and used his skills to unsettle the defenders all afternoon.
Taylor Nevens: Was given the captains armband today and gave a captains performance from start to finish.
Will Budden: Wills range of passing was a joy to watch and got around the pitch well today.
Brandyn Reeves: Played a team role today and helped to drive his team forward playing an unfamiliar role and had some good passages of play.
Cayden Brooker: Took his three goals like a pro and did a lot for team play as well, clinical today.
Leo Ferro(Ronaldo) : Asked to play right up top today, played a classic Ronaldo role and never gave the defence any time.

We roll onto the next challenge, Hampshire cup game at Romsey. Another test to improve further and grow again, it’s an amazing experience to be on this journey with our football family. JP