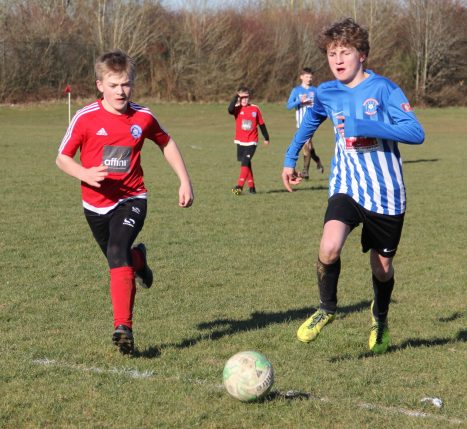 I think its fair to say, we have all missed the thrill of Sunday morning games but we have not missed the standing there and being exposed to the elements. So we rely on the football to be exciting, entertaining and packed full of goals to help us forget the fact we are cold and would like to be somewhere much warmer!
Now the last encounter with Overton saw a closely thought first half, swiftly followed by a second half that just kept giving. Goals, goals, goals was the order of the day and Andover comfortably ran out 10-0 victors. The concern however was, we had not played for 5 weeks and in the cold bitter conditions, would the lads be up for it? Some probably would have preferred to be at home playing FIFA or Fortnight, but the good news was we had a strong squad to pick from.

The boys had been training hard recently, looking at trying to turn defence into attack and attack into defence, having two mind sets at all times, so that we can ensure that defensively we are in good shape at all times and have the numbers to win the ball back, but also enabling us to transition quickly to take advantage when we do have the ball, counter attacking in numbers and converting those chances.

As the game kicked off, it was clear that the wind was going to be a factor, along with the bobbly pitch. Although it is the same for both teams, Andover do like to get the ball down on the floor and play some nice football, but both these factors would not assist, but early exchanges showed that Andover were not gonna be phased by this and looked to be the ones in control. The midfield looked stronger in the central areas, battling and winning the 50/50’s along with being first to the loose balls, the defence were holding a high line and not showing signs of any concerns or panic, winning the ball and delivering it into the midfield or front line and the forwards looked sharp, making good runs and snapping away some early shots. It was however still 0-0 and we were playing with the wind behind our backs so really needed to take advantage.

Eventually the ball, like in the first game against Overton, started to travel out wide, offering Charlie and Harry the space to run into and attempt to either deliver a cross or to run onto and have an attempt on goal. This was looking like the best route to goal and it was this that delivered the opener and reminded the boys that this is how you beat Overton. With Charlie getting away down the right after a nice ball by Daniel, it was cut back into the path of Joe in the box, with a nice quick pass out of the box to the impressive Salem, who cut inside his man and created that yard of space that allowed him to get his shot away. With the goalkeeper flat footed this curled from right to left and nestled in the corner, finally the deserved breakthrough, 1-0 Andover.

The game continued in the same vein throughout the first half, with Andover looking controlled and disciplined and Overton resorting to long aerial balls that got stuck in the wind and if any got through either Owen, Daniel or Finlay mopped up or James was off his line to claim the ball.
The second goal was delivered from a wonder strike from Jonty. No description from me as I was talking to one of the subs at the time! All I can tell you is, Harry set it up and Jonty wasted no time in dispatching a shot that riffled into the back of the net. Sorry Jonty, but I have been told the phrase’s, there’s no stopping those, no keeper would have got to that and pick that one out are fair descriptions.

So would it be a surprise to hear, when Jonty scored another cracker not long after his first one, I was distracted by having a conversation with another player!?!?! Yes, as the cheers went up for Andovers 3rd goal and Jontys second stunner of the day, I was not looking! So I can not describe this one either, but again it was supposedly another top drawer goal and one Jonty was supplied by a pass from George B.

And so onto the halftime team talk, which I can talk about as I was paying attention! Andy emphasised what a great job the boys had done to control the game, looked strong at the back and had held their shape. It was key though that we did not think the game was over, with 30 minutes still to come, they would need to remain focused, work hard and the key observation to add to the performance was to be strong in the tackle, be prepared to take a hit and do not allow them to use their size to intimidate.

As the second half started, it looked like the same pattern was to continue, early chances came the way of Andovers front men, but the Overton keeper was looking in good nick. It did appear that running into the wind was sapping the energy levels very rapidly however and with this the tide turned. Overton found that they were winning the balls in midfield, the 50/50’s became an Overton ball and the midfield dropped into the defensive areas, heaping pressure on Andover.
The defence where trying to still play a high line and this left space behind which Overton begun to exploit. Owen, Daniel and Finlay were being run ragged, George L, Jonty and George B could not get hold of the ball they chased and chased but begun to look leggy. This led to some opportunities for Overton and to the eventual award of a very dubious penalty!
Now James has a 100% record this season, he has faced 1 penalty in open play and saved this, so what was to happen next did not surprise me as with a little good fortune, James tipped the shot onto the cross bar and as it came down, he turned and grabbed the ball. Some say Justice was served, but I just say well done James!

To their credit Overton kept plugging away and eventually did score a goal to at least leave with something from the game. It came from a bit of indecision in the defence and when Daniel could not manage to clear his lines, it was the Overton player who reacted and poked the ball into the net.
So would this be a comeback or would the boys raise their game?

The boys did not stop battling, as always they never quite. The defence where asked to drop back an extra 10 yards so that the ball over the top could be cut out, the midfield where asked to engage to break the strangle hold Overton had on the middle of the park and with a little tweak here and there in personel, Andover regained control and scored a 4th.

Now Sam has christened himself ‘Miss It Miles’ and was starting to become frustrated with his lack of a goal. So when Sam was put through 1 on 1 by Harry to be given a gilt edged opportunity, I was willing it to go in. When Sam let the shot go it flew straight at the keeper, but for once that little bit of luck went Sams way and the ball went through the keepers hands and into the back of the net. Sams face lit up and he turned to face his team mates with a smile on his face, well done Sam, time to go on and bag yourself some more now you have finally broken the duck and got that monkey off your back.

That is how the game ended, a rather hard thought victory in the end, but some really positive things to come out of the game. Plenty of shots unleashed, controlled possession, some nice variety of play, some out wide and some down the middle, defensively sound and most importantly the first signs of the boys starting to transition from defence to attack and attack to defence with the shape staying tight.

A good team performance, but one player stole the show to be awarded Man of the Match. Yes the player that apparently scored two wonder goals……So I am told anyway! Well done Jonty, another fine display.
Finally as always thank you for your support, teas and coffees and Colin for running the line. Not looking promising this weekend, so we will just have to wait and see.

Stay safe in the snow all and enjoy if you can 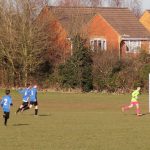 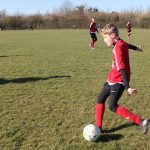 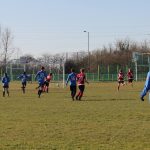 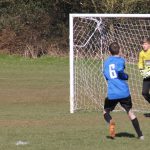 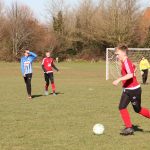 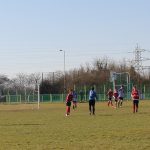 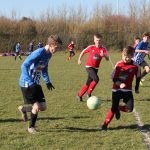 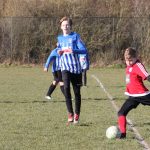 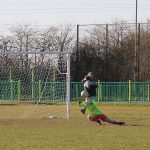 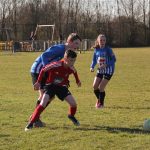 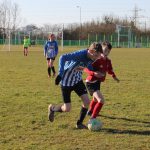 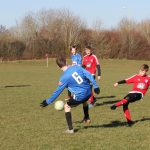 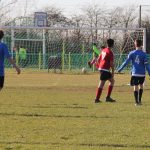 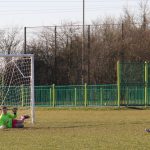 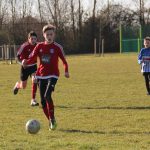 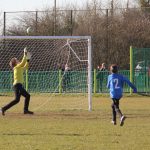 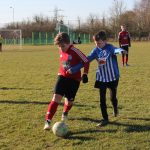 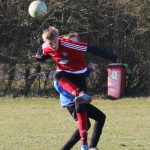 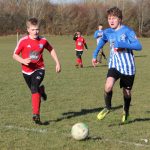 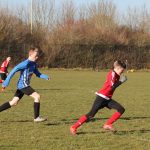