After a long wait, the new boys of the league were finally in action.  The team were hyper by the time kick off arrived, I have to admit to being the same.  After starting in May with 9 players and one with a broken leg, we have come a long way in a very short time.

This team has been assembled with a varied player back ground, a lot of different journeys to arrive at the Reds.  Within a week or so, they were friends already, with all the banter expected within a team!

After me throwing them straight into an international tournament and 5 games in 6 days, they had some time together. The preseason concluded with 3 friendlies and plenty of training sessions, the season arrived.

For the players who haven’t played competitively before, it must have been exciting times.  It’s always difficult to choose a starting line up, especially with a full team.

Town created plenty of chances throughout the match, but it wasn’t our day in front of goal. Dylan Cole scored the Reds first ever goal, a great strike and the team celebrated together!

There were a lot of positives to take out of the display, but we were not at it in certain departments, our passing was not up to our standard and we tried to force the play individually at times.

We have discussed the display and we understand where we can improve, that’s the essence of how we will grow as a team!  It was so pleasing to see every player getting involved with the play.

Although we got beaten on the day, we have all learnt some new lessons and have a better understanding of what it takes in this league. I’m hoping for a positive response, if training is anything to go by, we will improve in the next match.

Parents player went to Eadie Shum and managers player to TJ, both showed new and existing skill on a difficult day.

We have a huge untapped talent pool within this team, we are at the very start of our footballing journey. I believe in this team so strongly, I can honestly say it’s a pleasure to work with this group! Thank you all 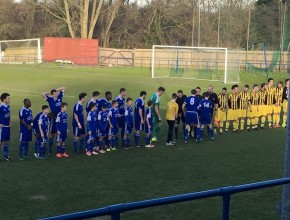 The Blues were privileged to be mascots for the Andover Towns game with Brockenhurst, the boys were treated to a pre match training session with the Senior Town squad. They had the opportunity to taste the excitement of the Portway crowd as they showed their skills prior to kick off. A special training session was arranged for our stopper Daniel Butt, Jamie and Michael ran Dan through a typical pre match build up, it was a great incite for him and to pick up some new ideas and techniques. It’s great that the seniors take time out to pass on their skills and I hope they realise the positive impact this has on the boys. 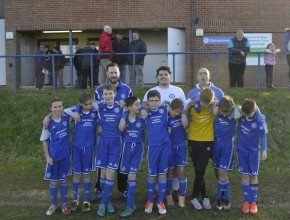 Jamie Bray, who is still recovering from a dislocated shoulder sustained earlier this season, showed this commitment as he offered to arrange another pre match session for Dan at the Portway Stadium. The confidence gained from this occasion is unbelievable and as the feeder club for the Sydenhams league team, the boys can strive to be chosen by the seniors in years to come. They performed their mascot duties with pure professionalism and stayed on to support the Seniors and watch them take on Brockenhurst, the game was a tough encounter and displayed the desire needed when you reach this standard of football. It was great to have our Chairman also in attendance, Simon Timms took time out to support the boys. Watching the determination shown was definitely the motivation for 12s Blue Coach Darren Reeves to arrange the event, as the boys are having a good season thus far, it’s good to open their eyes to new training methods and demonstrate what is possible with hard work and dedication.

No game this week as cancelled, but the boys are so keen to improve, we have arranged a impromptu training session instead. No doubt keen to replicate the skills learned from today, A big thank you to all at Andover Town FC, putting something back into the local community. Andover Town Youth is built on the premise of developing the talent for the next generation, it’s clear the Seniors share the vision and we will continue to embrace these ties. JP